Wallace Ferguson, guide and caretaker at Greyfriar’s Kirk in Edinburgh

Wallace Ferguson, guide and caretaker at Greyfriar’s Kirk in Edinburgh, gave publisher Steve Gierhart and his wife, Bonny, a real treat, a lively personal tour of Greyfriar’s Kirk and Cemetery on their recent cruise around the British Isles.  But the real treat was the secret of Harrry Potter that lay nearby.

I must report on a chance meeting that my wife, Bonny, and I had at Greyfriars’ Kirk (Scottish name for Church) in Edinburgh on our recent trip to the British Isles.

Bonny and I decided to jump off the tour bus for a walk around the old cemetery and church of Greyfriars’ Kirk to see the statue of the little dog, Greyfriar’s Bobby.  For those of you who do not know, Bobby, a Skye Terrier, became known in 19th-century Edinburgh for spending 14 years guarding the grave of his owner on the church grounds, in the process winning the hearts of all Edinburgh where he became the mascot of the city.

As we walked the beautiful gardens and viewed the old tombstones of the ancient cemetery and enjoyed the interior of the Kirk, we gained the attention of an older gentleman with a walking stick, Wallace Ferguson .  He was quite the talker.  He had noticed our enjoyment of the herb garden and talked about some of the plants.  Then Wallace told us he was a volunteer from the Kirk who routinely walked the grounds because so many vandals had destroyed many of the headstones.  We were avid listeners as he gave us a free tour of the many tombstones and mausoleums, including “Bloody McKenzie”, the old prison grounds (quite blood curdling as woman and children were held and executed there along with men by ole Bloody) and one of the scholars who helped compile the King James version of the Bible.

However, the more interesting discussion was his revelation that J.K. Rowling taught at Heriot’s School, next door to Greyfriars, and that Heriot’s was the basis for Hogwarts.  In fact, Heriot’s looks much like how Hogwarts is portrayed in the movies, though it is smaller than the large castle-like structure in the cinema.  More astonishingly, many of Rowlings’ characters from the Potter stories have names derived from the tombstones of Greyfriar’s including McGonagall, Hufflepuff and Dumbledore.  We even saw the tombstone of Thomas Riddell, the more earthly-name of evil wizard, Voldemort.  Then the icing on the cake was seeing the kids emerge from Heriot’s, ever much looking like the children in uniform coming to Hogwarts on the Hogwarts Express.

So thank you, Gentleman Wallace, for a most entertaining day.  Our donation to the Kirk does not come close to the happy afternoon you gave us.  If you ever come to Alabama, look us up so we can return the favor!  (Might even happen as Wallace has been to the States more than once)

Photos on the next page so continue on. 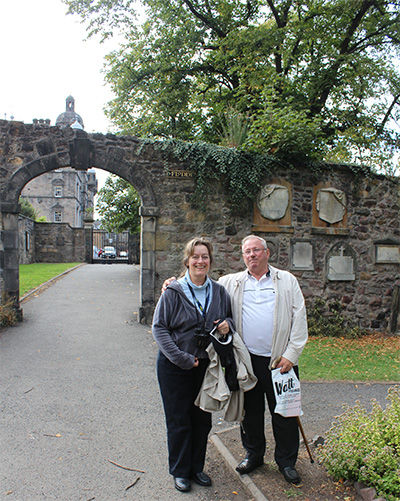 Wallace Ferguson and Bonny Gierhart at Greyfriars Kirk and Cemetery. Bonny is the wife of publisher Steve Gierhart. 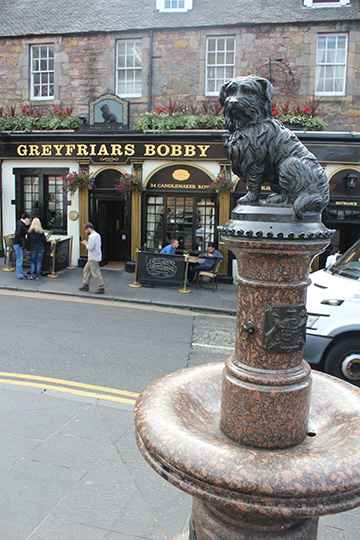 The statue of the little dog that won the hearts and souls of Edinburgh, Scotland. 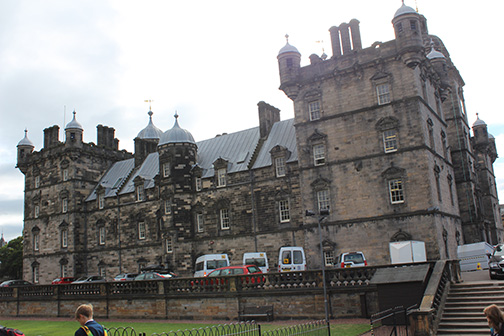 Heriot’s School of Edinburgh, established in 1628, the basis for Hogwarts of Harry Potter fame. 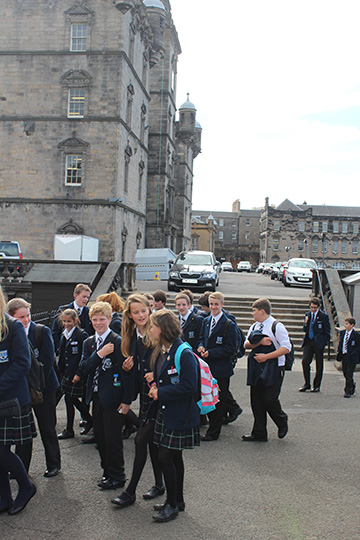 Students at Heriort’s School in Edinburgh depart for the day. Heriot’s is the real school that was the basis for Hogwarts of Harry Potter fame. J.K. Rowling taught there for a year.