Tuxedo Junction-Right Back Where I Belong is Published!

Tuxedo Junction – Right Back Where I Belong by Carol P. Ealons is published by The Ardent Writer Press 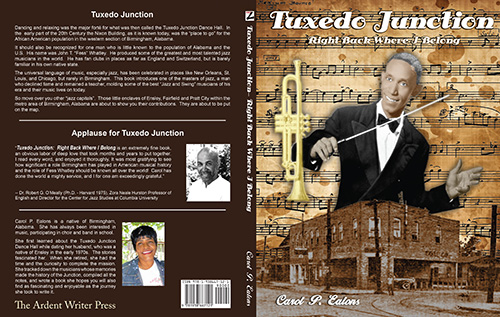 Tuxedo Junction – Right Back Where I Belong was published on July 26, 2013, Carol P. Ealons’ wonderful and era-tasting delight about Birmingham, Alabama’s rightful place in the history of jazz.

Tuxedo Junction – Right Back Where I Belong by Carol P. Ealons was published on July 26, 2013. Carol’s wonderful and era-tasting delight about Birmingham, Alabama’s rightful place in the history of jazz, is endorsed by several notables, including Dr. Robert O’Mealey, Director of Columbia University’s Center for Jazz Studies, Bobby L. Hayden, honor guard for President Kennedy and historian for the Tennessee Valley Jazz Society, Soott Yanow, Author of ten jazz books including The Jazz Singers, Trumpet Kings, Swing, Bebop, Jazz On Film and Jazz On Record 1917-76, and Frank “Doc” Adams, inaugural member of the Alabama Jazz Hall of Fame and Director of Education Emeritus at the Alabama Jazz Hall of Fame.

Carol captures all of the senses and background of the musicians, the city and its people, the toe-tapping music and the men who made it happen.  Most often, these men were over-looked by history but it was their hearts and souls that were the instruments of success of the jazz and swing era.

Singled out is a man who did not make his name performing but gave up performance to teach and mentor so many of these talented musicians, John T. “Fess” Whatley.

Soon a hardback version will be available as well.