Toker’s Blood by Arthur “Butch” Carroll was published by The Ardent Writer Press on September 29, 2014. 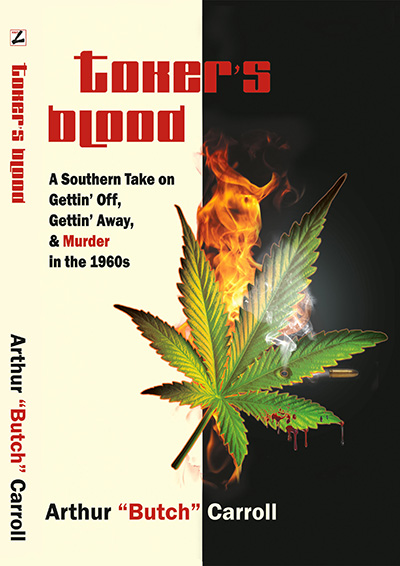 The crime thriller, Toker’s Blood, like the era it is set, the chaotic Sixties, is both adrenaline rush and sweetly naive, taking you back to the music and fun-loving trait of the time but revealing the explosion to culture (or counter culture) in its roots.

It is best stated on the back cover:

On Friday nights at Hilda’s Drive-In, teenagers Burt Carron and his buddies dance all too closely with their dates to the stimulating “Motown” beat of the Sixties. Then on Saturday nights they guzzle beer and burn rubber around town in their muscle cars. There is no police intervention. Instead, the small town chief, Chief Larry Spivey, looks the other way.

For years Oak Bottom, Alabama has been a small Southern town most citizens believe insulated from big city crime, even as it grew around them amidst the culture-changing decade of the 1960s. But neither Chief Spivey or the citizens of Oak Bottom can hide their heads in the sand any longer after one of the young men disappears and one crime after another leads everyone to the adder in their midst.

Toker’s Blood is a glimpse of a last fleeting decade of innocence when ignorance was bliss, even as rock’n roll was cool. Nonetheless, the enlightenment of youth to the illusions around them is quickened by the dark side of a rising drug culture in small town U.S.A.