The Ardent Writer Press welcomes author Sophia Bogart with her satisfying dramatic take on a family’s path through tragedy and a small town’s descent into silence,

The Killing of Jefferies Flat 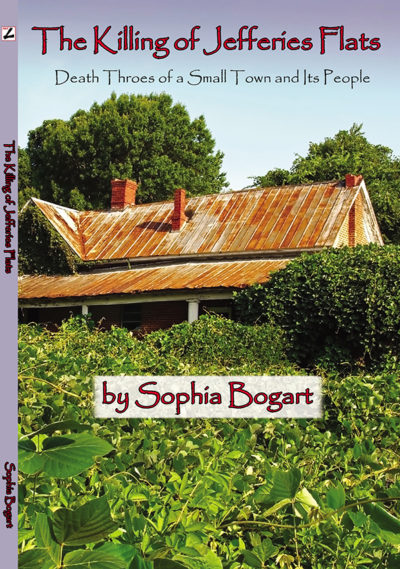 My grandparents’ home was often a place for any excuse to have a family gathering. There was never any thought of the television or a radio. Effortlessly, conversations flowed inevitably to stories, some humorous that grew more ridiculous with each telling, others a more somber recounting of the family history. It was never named as ‘storytelling’ but those days and countless hours spent on church pews listening to my father preach is where I first learned the craft of storytelling.
Oasi Bradford was my father’s mother. On rare occasions I would here tiny tidbits about her, usually how closely that I resembled her. In later years, as I began to sew, I was told how she also had the same passion. Over the years I managed to figure out that she had committed suicide when my father was a boy. I was naturally curious about someone so closely related to me had succumbed to such a tragic end. One day, I went to my mother and recapped the tiny scraps of information that I had gathered and asked for more. To my surprise my mother said that I knew as much about Oasi as she did and then she very firmly told me not to ask my father because he won’t talk about his mother, even to her.
So determined to find out more, I wrote a letter to Oasi’s mother, who I had only met a couple of times. She quickly replied with a long letter describing her daughter. She wrote of her charms and her talents and also her trials with darkness and in closing an account of her final days. The details were still faint but I was proud that I had somehow gotten a glimpse of something that felt forbidden. These were the first seeds that would become The Killing of Jefferies Flats.
Years past and I slipped into adulthood, married an incredible loving husband, and had thriving job in retail management for a dozen years before becoming hopelessly burnt out on the career. I began scouring the want ads for some new direction in my life. There was an ad posted for an alterationist. The pay wasn’t bad and I certainly had the skills. I determined that if I were to make such a change it would be on my own terms, and thus began a marvelous 20 year career of sole proprietorship of Alternatives Alterations and Custom Sewing.
Business was great. I had wonderful, loyal, and generous customers. I had it all! That is, until Rheumatoid Arthritis made it impossible for me continue the business that I had come to love. Dark days followed as I struggled with the loss of identity and depression.
As God has such a plan, I found myself with a lot of time on my hands and still a nagging curiosity about my family’s history. With my father’s consent I took the tales that I recalled, along with weeks of scanning microfilm for more concrete information as well as background stories. Just like that, the words of the first rough draft fell onto the page. Unfortunately, those words also fell into a drawer to lay dormant for over a year.
What followed was months of pain and depression. Until I saw an announcement for a class at the Everett Senior Center for Coping with Chronic Illness. This is when things began to turn around. I learned ways of coping; and simultaneously, my wonderful doctor changed my meds and my arthritis began to improve. The instructors of the class encouraged me to try new distractions from my pain, so I began a Tia Chi class where I met a group of women from a knit/ crochet/ quilting group. They immediately welcomed me like long lost family. A bond with friends like I had never known before began and continues to this day. This kept me involved at the senior center where I took a class on writing memoirs taught by Bonny Millard.
Bonny has been an incredible gift; she helped me get my draft ready for submission and coached me through writing a synopsis and letter of inquiry as well as provided a list of potential publishers. Enter Doyle Duke. I cannot begin to express my gratitude for his generous hours of work, helping me to add definition, texture, and depth to my story while staying true to my vision. This page would not be complete without a nod to Steve Gierhart for putting the polish on the final drafts. To Ardent Writer Press I am forever in your debt.
So with The Killing of Jefferies Flats now published I can look back and see that there has always been a path for me to this day. I have every faith my path, while not visible to me now, continues toward even greater things.

The hard-working citizens of Jefferies Flats, a small town in a valley of East Tennessee, live simple lives and the end of World War II brings them hope for peace and prosperity. The return of their native sons is a time for celebration and renewal, but simple lives do not mean that life is simple. Instead, the casual indiscretions of two who stayed behind will taint the return of these young veterans of battle.
The difference between renewal and chaos is a delicate balance from which the small town may never recover.

The Killing of Jefferies Flat by Sophia Bogart