The Ardent Writer Press is honored to present the republication of Assigned to Adventure by pioneer journalist and broadcaster Irene Corbally Kuhn (1898-1995). (From Wikipedia) Her career spanned seven decades in five continents. She became famous in the ’20s and ’30s by working as a reporter for many newspapers in the United States and China. Mrs. Kuhn was a woman of many “firsts”, among others, she was the first woman to broadcast from the Orient and the first individual to broadcast from a US Navy vessel. In addition to countless columns for numerous newspapers, she also wrote a memoir, a documentary and a screen-play. 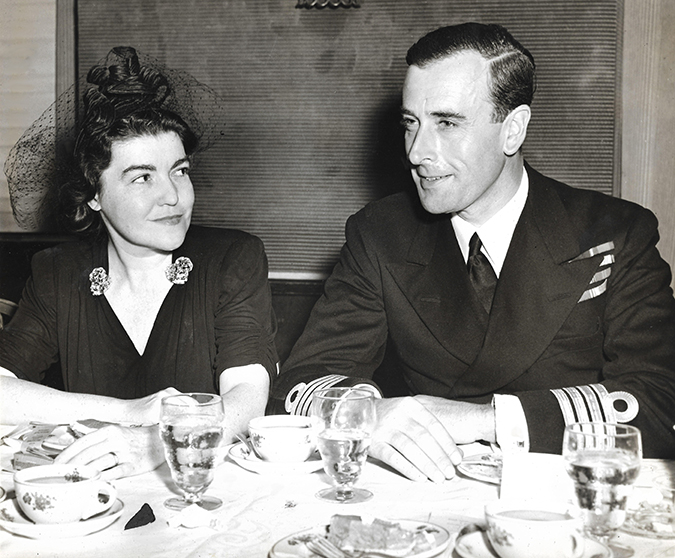 Heather today along with a photo from her shared trip to Alaska with her Grandmother in 1981; Irene in 1918 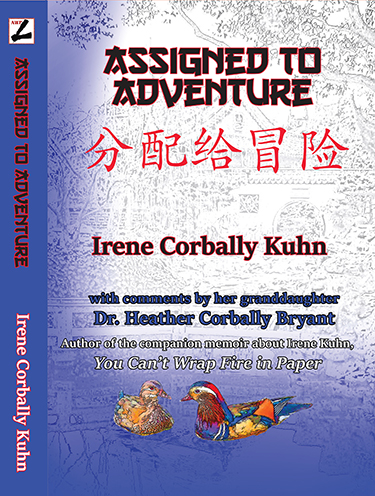 The 21st Century has turned the journalistic world upside down, but the 19th and most of the 20th Century could be defined as the Golden Age of Journalism, a time when reporters were respected, even glamorous. Many went on to more famous careers as authors. Ernest Hemingway. Margaret Mitchell. Charles Dickens. Mark Twain. All started as journalists.

Add to that list Irene Corbally Kuhn. Starting an illustrious career in 1920 she was a ground-breaking journalist working in a male-dominated profession and world. She was a trail blazer because she demonstrated an uncanny ability to write not just stories assumed best written by women, but aggressively looked for those normally held by her male counterparts.

Assigned to Adventure is Irene’s personal story of her career through 1937. Originally published in 1938, this is a republished second edition with a foreword by her granddaughter, Heather Corbally Bryant, a writing lecturer at Wellesley College and an author/poet of her own right. Read it for insight into what it took for a woman to be successful in that era. Read it for fun with the many humorous and engaging stories of Irene’s life as a reporter for world class newspapers such as the New York Daily News, the Paris Tribune, the Honolulu Star-Bulletin, the New York World-Telegram and Shanghai’s China Press which then transitioned into a career as a Hollywood screenwriter and radio broadcaster for Metro-Goldyn-Mayer, Paramount, NBC, and CBS.

Through it all, you’ll quickly see that this is a woman for all ages, one to be looked up by the young and old, male or female, dreamers or realists. 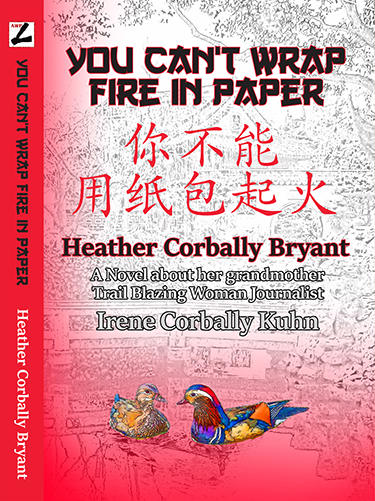 My grandmother, the journalist Irene Corbally Kuhn, told me I had to be a writer, that I had the soul of a writer. I began life knowing I was a third generation writer. My mother, Rene Leilani Kuhn, published two award-winning  novels before she was thirty. I took a more circuitous route to writing—publishing academic articles, and scribbling poems in notebooks while I studied for my PhD. It took me a long time to realize that I could tell my own stories.
When my grandmother died at the end of 1995, I inherited her papers. In them I found the seeds of this story. I began putting the pieces together when my babies napped. Those babies are now 24 and 21. The years in between were filled with researching, writing, and rewriting. For my entire life I had been hearing the story of my grandfather dying too young in China. It was always an unsolved mystery, a tragedy no one could explain. “You Can’t Wrap Fire in Paper,” unravels the story of my grandparents’ passionate love story in Shanghai, and my mother’s birth in Honolulu, and her early years in China. She spoke Chinese before she spoke English.
When my mother died in January of 2013, I knew I had to finish this book; it is both my inheritance and my obligation to bring this story to life. I began this project believing I would find the answer, that there was only one answer. During my work on this project, I have realized that life is far more complicated than I originally realized, that there is rarely a single answer to any question.
I have woven together fact and fiction to recreate this love story of two passionate and headstrong people, my grandparents, who handed down this legacy to me. I have written this story in the corners of my life, in between raising my children, writing and publishing poetry, teaching writing at Harvard, the Pennsylvania State University, and now, at Wellesley College. My grandmother, I believe, would be happy to hear her story told.

The Link to Heather’s author website (www.heathercorballybryant.com) is HERE.

Other Books by Heather Corbally Bryant