The Ardent Writer Press signed Gladys Hodge Sherrer to a contract for her Civil War Saga Trapped in the Crossfire on Tuesday, January 17 at the Weeden House Museum in Twickenham District of Huntsville. Crossfire portrays Sherrer’s vision of what it was like for her ancestors, Oliver and Sarah Williams, when they moved to North Alabama under the clouds of war in 1858.  Included in the signing event was Rep. Phil Williams, her cousin and also a descendant of Oliver and Sarah, fellow legislator Rep. Mike Ball, Weeden House Director Beth Hamilton, and Ardent Writer Press’ publisher Steve Gierhart and editor Doyle Duke. 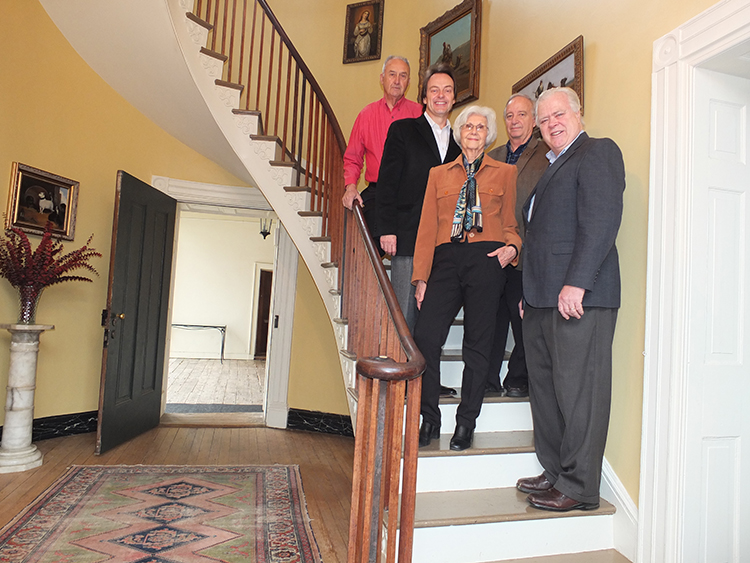 Beth Hamilton, Director of Weeden House, with Author Gladys Sherrer and Publisher Steve Gierhart at the signing for Sherrer’s novel, Trapped in the Crossfire

Steve Gierhart, Publisher The Ardent Writer Press, and Gladys Sherrer, author of Trapped in the Crossfire, sign her book contract at Weeden House in the Twickenham District of Huntsville on Tuesday, January 17, 2017

FROM GLADYS, AN INTRODUCTION TO TRAPPED IN THE CROSSFIRE

I traveled the South eight years in search of truth about my ancestors. In 1858 they migrated to North Alabama, hoping to escape the portents of war, only to be caught in the conflict anyway. My research took me to Civil War battlegrounds, historians and historical museums, and archives. As a result, I wrote their story in the Civil War saga, Trapped in the Crossfire.

My family’s story is not unique. Everyone struggled, but Sarah Hammett Williams and Oliver Perry Williams, the matriarch and patriarch of our North Alabama Williams clan, were Union loyalists in a region where that was not an easy thing to do. They were driven from their home in South Carolina for the safety in the North Alabama wilderness. That was what it was at that time, even though several settlements dotted the landscape along with the city of Huntsville, and of course their safety was short-lived and illusory.

My goal was not just to honor my family, but to capture a time of divisiveness and to show that the worst of times can bring about the best in us. I wanted to create down-to-earth characters in a background of historical accuracy. To do that, I had to write as if I lived their experience. I had to feel their emotional turmoil to write their engrossing tale.

Numerous descendants of Sarah and Oliver Perry Williams still remain in North Alabama. I have a great love and admiration for John Raymond Williams, who inspired me to write Trapped in the Crossfire. I met my cousin in a roundabout way. A chance encounter with an ancient farmer on Sand Mountain led me to John Raymond and our mutual ancestor, his grandfather and my great grandfather, John Franklin Williams. The farmer said something about John Franklin that quickened my pulse. “I knew Tater John. Everybody called him Tater John because he sold sweet potato slips, though never on Saturday, being a Seventh-day Adventist.” He proceeded to direct me to John Raymond, grandson of Tater John, and my mother’s favorite cousin.

When I finally met John in his field of watermelons, he led me to the graves of Sarah and Oliver Perry Williams, who were buried on his farm. We began a warm relationship that ignited my fire for our roots with his tales of the past and our family.

John Raymond, since passed, typified the character of our family. As a lad, John fought in World War II, at Anzio. He was among the first Americans to enter Rome, and was awarded a Purple Heart. His 30-year career in Civil Service, Air Force, and Army, included time at Redstone Arsenal, where he received numerous awards, plus a Distinguished Service Award.

I hope that my novel honors him and our family appropriately, especially our founders Sarah and Oliver Williams. On Monday, January 17, 2017 I signed a book contract for Trapped in the Crossfire with the Ardent Writer Press. The signing took place at the Weeden House in the Twickenham District of Huntsville, Alabama. Attending were my cousin and fellow Williams descendant Alabama House Representative for Madison County, Phil Williams and Representative Mike Ball. I also sincerely appreciate the assistance of the Weeden House Museum director, Beth Hamilton, who was in attendance with publisher Steve Gierhart and editor, Doyle Duke. The book launch is planned for October 15, 2017.