Friends and family of Ardent Writer Press Author Anne Rutledge held a service in celebration of the life of this distinguished educator and writer in Huntsville, Alabama on December 12, 2015.  Anne passed away on November  25 and the service was held two and a half weeks later to give time for the multitude of family and friends to attend her funeral at Royal Funeral Home and for the body to be prepared and brought from Miami, Florida where she was under the care of her daughter, Barbara Howard.  After the service and internment, a dinner was held at her church, the Unitarian Universalist Church of Huntsville.

The service was a touching display of the love Anne imbued in her many family members and friends.  Three pastors gave an address, two of whom were related to Anne and talked about in her memoir, Granddaughter of a Runaway Slave Boy.  They were Franklin Rutledge, a first cousin, and Sylvester “Jack” Rutledge Jr, Anne’s nephew.  The Reverend Sylvester Rutledge peppered his talk with humorous recollections of his “auntie.” When Sylvester was asked if he had gone back to college, he would routinely and respectfully say “Auntie, I’m not going back to college.” Anne would always reply routinely and respectfully (read “firmly”), “Oh, yes, you are!” Of course Rev. Rutledge did and completed not only one degree but several others, just like his globe-trotting professor of an aunt. Her home pastor, Pastor Alice Syltie of the Unitarian Universalist Church of Huntsville, noted her lengthy friendship with Anne, including her time conducting an interview with Anne for part of her graduate work. In all of these eulogies was a common thread of a driven, but compassionate woman of the arts and life, a role model for students and family members.

Many of Anne’s professional and writing friends from Alabama A&M, Huntsville Literary Association, and American Pen Women also attended, many of which shared in happy recollections of her work and life. One of these was Mary Esther Johnson, Anne’s “Right Hand Woman,” who was instrumental in getting Anne’s last book, her memoir, to the Ardent Writer Press and publisher Steve Gierhart.  Mary Esther sent the proof to Anne through Barbara Howard, Anne’s daughter.  The proof of Granddaughter of a Runaway Slave Boy, a bound copy of the memoir, including the cover by Ardent Writer design graphics artist Jennifer Jones, was essentially that which was published.  Importantly, Anne was able to hold a proof copy of her book before her death.  Ironically, she died on the day of its publication.

Anne Geneva Rutledge, born January 21, 1921, died on November 25, 2015 at the age of 94, but as her “legacy” stated in the program of her service, “Her 90s were just as exciting as her 40s were as she continued to entertain audiences with her soul-filling poetry and fact-filled prose.”

Anne will be missed by all.

Link to her book on Amazon is HERE. 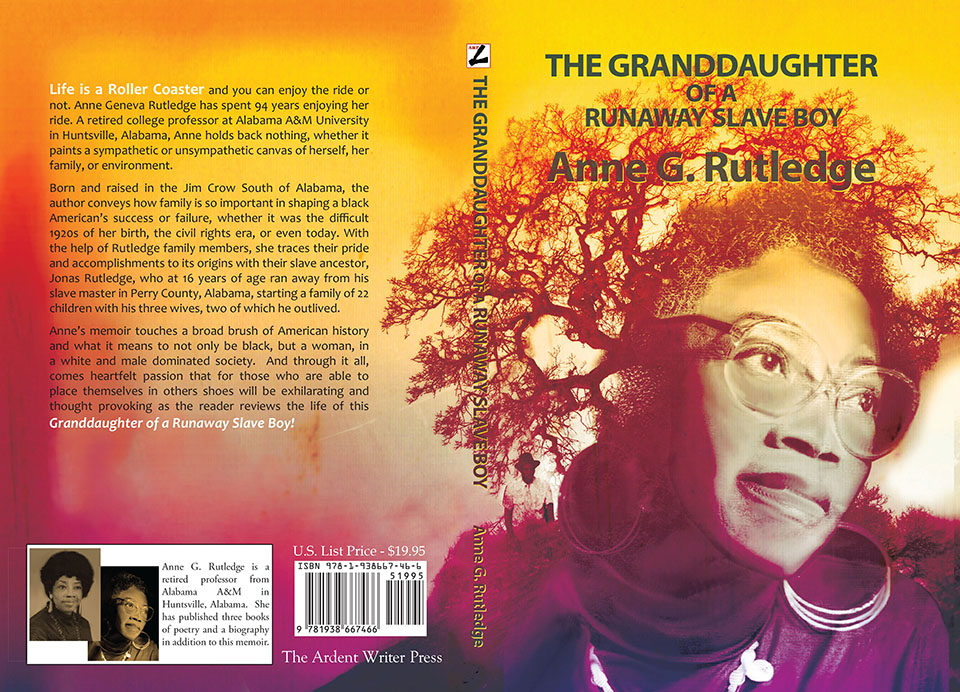 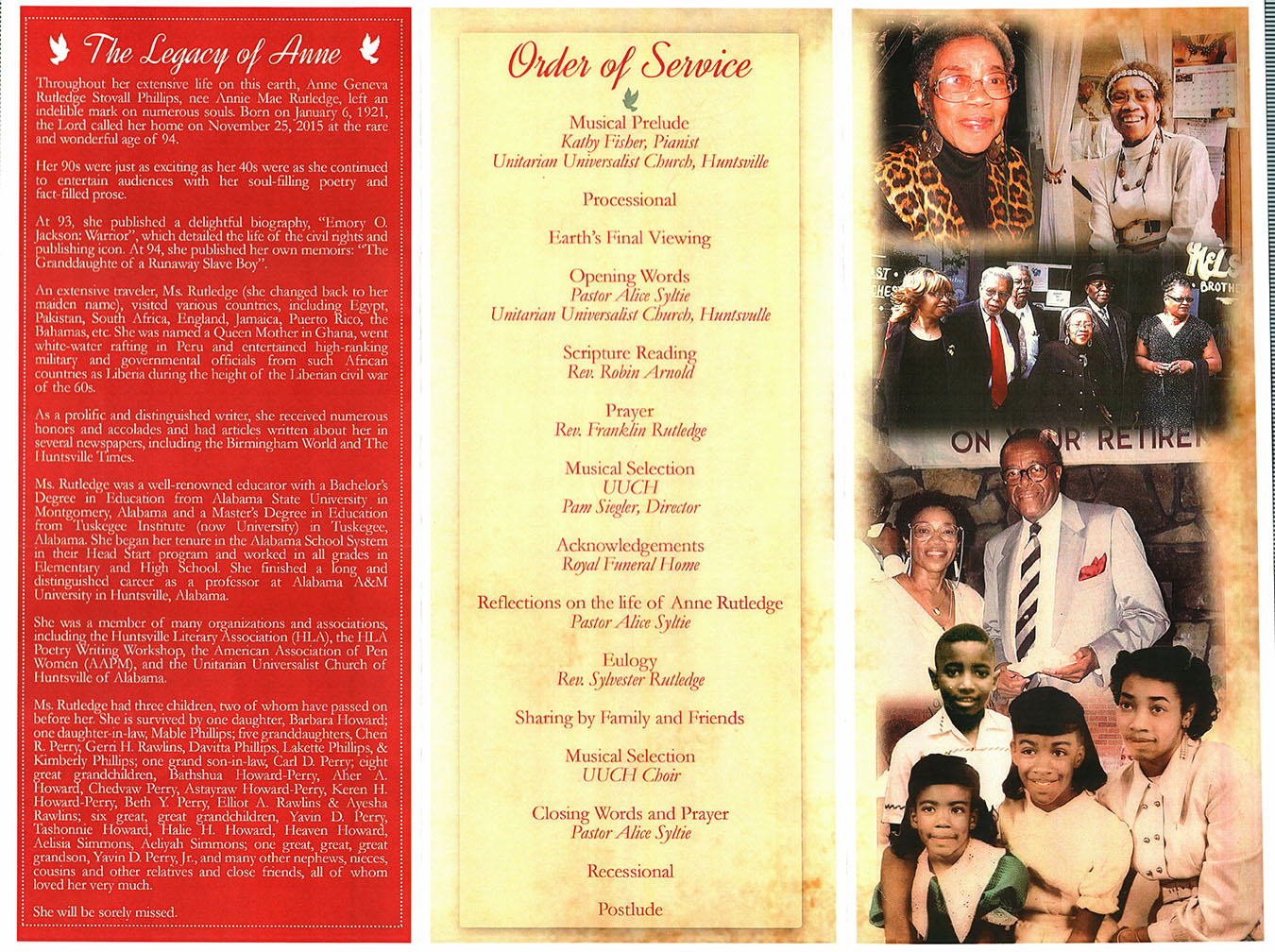 Dale “Steve” Gierhart is a retired business manager for the United States Army. Based in Huntsville, Alabama on Redstone Arsenal, his career lasted from 1975 to 2010 in which he managed contracts, finances/accounting, and cost estimating for several missile defense systems, among which were Stinger, Avenger, Chaparral, Sentinel, JLENS, SLAMRAAM, and Non-Line of Sight.  The author wishes to thank the many co-workers, peers, and contractors who made these programs successful.  It is their tireless work that brought these systems to the soldier that needed them.  While budget constraints made it difficult for some of their work to see its full potential, they never blinked, they adjusted.  They persevered. Steve hails from Shawnee, Oklahoma; but most of his adult life has been spent in the beautiful hills of North Alabama where he lives with his wife, Bonny, who raises Tennessee Walking Horses. Between them, Steve and Bonny have 5 children and 7 grandchildren, and another grandbaby is on the way. Steve enjoys writing now that he is retired and plans more excursions of the imagination. He and Bonny, a retired engineer who worked as a contractor on several NASA and Army programs, will travel in their retirement though 15 horses, 4 dogs and 3 cats can crimp the best of plans.