The 2014 Alabama Book Festival is a success!

On April 19 in Montgomery, Alabama, The Ardent Writer Press attended the Alabama Book Festival.  The festival is heavily supported by the Alabama State Council for the Arts and the Alabama Writers’ Forum.

The Ardent Writer Press participated in a packed Alabama Book Festival this past Saturday, April 19th, in Montgomery, Alabama.

A select few authors conducted discussions about their book and signed copies for the public, including Ardent Writer Press’ own Mike Wines!  Mike discussed Stupid Alabama and showed his scaly and slimy friends, the Indigo Snake and a Spotted Salamander.  Mike noted that Alabama has the highest bio-diversity of any state in the union.

Other highlights included a poignant and stirring account of remembrances of the Birmingham church bombings from the civil rights era.  Heading this reading was Carolyn Maull McKinstry, a survivor of the September 15, 1963 bombing.  Carolyn was a friend of the girls killed.  She also read from her book, While the World Watched.  Accompanying her with his own accounts of change from that period was AWF Board member and writer Chervis Isom, author of The Newspaper Boy.  Carolyn and Chervis both conveyed the knowledge that whether you were victim or product of a terrible time and culture, change for the good was not just a hope, but a reality for many. Carolyn and Chervis were personally responsible for starting a movement that resulted in a statue being placed for the young girls killed in the bombing of the 16th Street Baptist Church. The Four Spirits title was inspired by Birmingham-born writer Sena Jeter Naslund’s novel of the same name.  Sena attended the reading at the Book Festival.

Steve also attended the readings of poet Randall Horton from his collection Pitch Dark Anarchy.  AWF Executive Director Jeanie Thompson was the moderator for both of these wonderful events.

AWF Board President Kirk Concutt and members, Sue Brannan Walker (former poet laureate of Alabama), Jim Buford and Patty Pinkerton were on hand to help with the event.

All AWP authors visited and talked with fans.

Photos are on the following page (click “Continue Reading”). 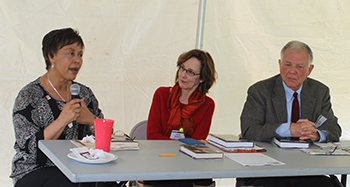 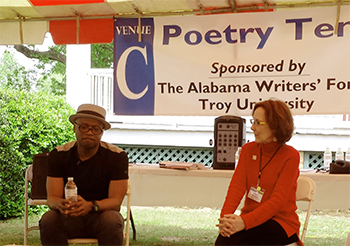 Randall Horton, author and poet, sits with Moderator Jeanie Thompson at the Poetry Tent during the 2014 Alabama Book Festival. 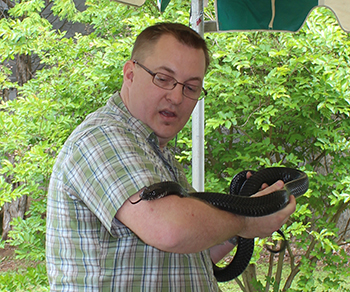 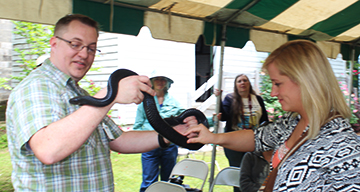 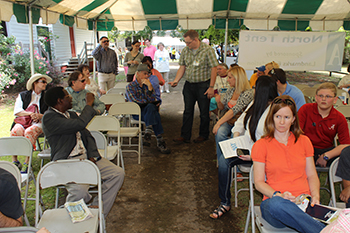 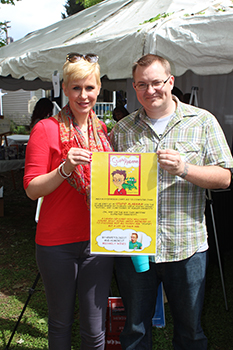 Cover Illustrator Stephanie Gierhart and author Mike Wines with a poster of his humorous novel, Stupid Alabama. Jennifer Jones of Edmond, Oklahoma and Chay Nabors of Madison, Alabama also contributed to the cover. 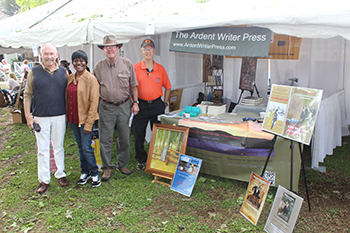 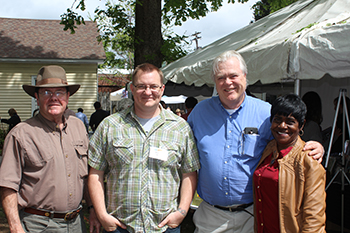 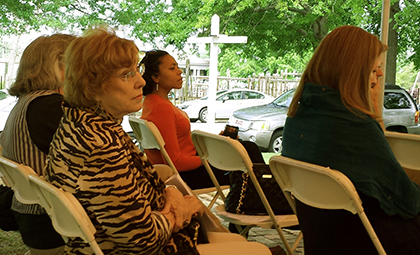 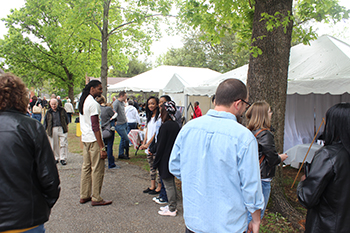