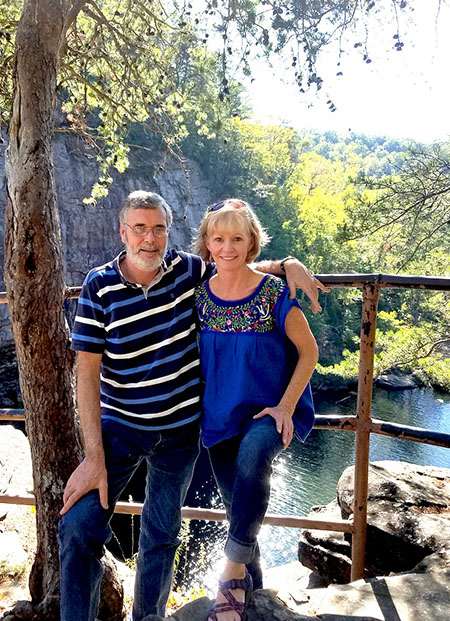 Ron Yates has pursued various career paths with limited results. Fresh out of high school in 1971 he went to work on the graveyard shift at a wire manufacturing plant in West Georgia. The factory comprised acres of noisy machinery devoted to refining, milling, drawing, stranding, and insulating copper in a multitude of sizes and types. Yates soon discovered that copper wire in big coils is heavy. He mastered the operation of the machines, making high production numbers and decent money at the expense of his lower back and normal sleep patterns. During those long shifts he would often remember the encouraging words of former teachers. One in particular, a young man named Ron Walton (whose gentle manner and methodology could be characterized as hippie-influenced avant-garde), had noted Yates’s knack for writing and ready grasp of literary concepts. Walton—whose favorite group was Crosby, Stills, and Nash—had assured Yates that a college degree would be a desirable, attainable thing.

Yates was also fortunate to have a concerned girlfriend named Helen who reinforced the idea that using his brain could be more rewarding and less damaging to his body than enduring a life of hard labor in a grimy factory. This discerning young woman led Yates by the hand through the registration process at West Georgia College in Carrollton, GA. He was lost for a quarter or two but soon became adept at scheduling study time around the party schedule. In 1977 he became the first in his family to graduate college, earning a BA in English and a teaching certificate. He acquired these credentials without much distinction, maintaining a B average and making the Dean’s List a grand total of one time.

Yates still wasn’t ready to embark on what he perceived to be a stifling career inside a classroom. His blue-collar roots held him back, along with his desire for a free-spirited lifestyle, acquired through four years of wild living while attending what was then Georgia’s number-one party school. By this time Yates thought of himself as a writer even though he was too distracted to actually produce much writing. Drugs, sex, and rock music were pervasive, and Yates, through Herculean efforts (and the prayers of loved ones, he readily admits), was barely able to avoid succumbing completely to the debauchery that swirled about him in sexy shapes and psychedelic colors. After graduating he tried to maintain a hippie lifestyle but soon discovered that money was required for basic necessities.

He stumbled through a series of lumber yard, warehouse, and factory jobs before finally landing a teaching gig at Heard County High in Franklin, GA. He didn’t hate it and held on there through most of the eighties. He eventually worked at two other high schools before retiring in May of 2013, but his career was not a continuous stream. About midway through, as he was growing increasingly burned out, he was bitten by the entrepreneurial bug. Having always been a hands-on guy with plenty of experience at fixing things, he decided to open an automotive repair shop, which he operated through most of the nineties.
When asked about that experience, Yates shook his head. “It was tough. My fingernails stayed black and my knuckles were always scraped up. I finally had to admit that teaching, with all its headaches, was much easier.” Having swallowed his pride, he jumped through hoops to renew his certificate and landed a job at Haralson County High near the Georgia-Alabama line. He managed a long, uninterrupted streak there—fourteen years—before retiring. As with his other endeavors, his time at Haralson was characterized by the lack of any real distinction, although he was once honored as STAR Teacher and twice nominated for Teacher of the Year.

He never led teams to state championships, but many of his students have accomplished great things. Some of them it seems (through anecdotal evidence and hearsay) appreciate the instruction, guidance, and encouragement Yates provided. He continues to track the adventures of many of his former students on social media, and he likes to think that he may have made small contributions to their success. When asked what he considers to be his greatest teaching accomplishment, Yates replied, “Navigating the waters of that complex system without getting fired wasn’t easy. Some of my administrators commented that I was ‘wound a little tight,’ and I guess that’s true. The kids, though, are what’s important. I take pride in knowing that many of my former students value the time they spent in my classroom and that they probably learned something about writing, literature, or life in general.”

Yates earned an MA in English from the University of West Georgia in 1986. In 2009, after finally realizing it was time to get serious about his true calling, he received an MFA in creative writing from Queens University of Charlotte. He has since published stories in a variety of literary journals. Make It Right: A Novella and Eight Stories is his first published book. He will be sixty-five years old when it’s released.

When asked about the experience of pushing a book into the world, Yates said, “It’s exciting to have a dream come true, even if it happens years later than it should have. I appreciate the confidence Steve and Doyle at Ardent Writer Press placed in me and this book and the effort they applied toward producing a finished product we can be proud of.” Yates is also anticipating the publication of his novel Ben Stempton’s Boy in October of 2019.

Yates and his wife Carol enjoy life on Lake Wedowee, near Mount Cheaha in Alabama.

Ron Yates blogs about writing and other subjects at https://ronyates.net/. He can also be found on Facebook.

Listed below are a few of Yates’s published stories that aren’t included in Make It Right:

5. “Incident at the Geemer Café” was published in Hemingway Shorts, Volume 2. This journal is not available for online reading but a print copy can be ordered from their website. Be sure to specify Volume 2. (https://www.hemingwaybirthplace.com/hemingway-shorts)

REVIEWS OF MAKE IT RIGHT

“Yates’ characters are great because they are — most of them — very typical Southern blue-collar folk who are fully realized enough to resist being typecast. Some of the stories, “Inertia,” “I Sank the Mandolin,” and “Barbecue” come to mind, turned my thoughts immediately to their kinship with Denis Johnson’s writing. There’s something about the dark, slightly unhinged quality of the characters, the gritty and visceral writing, that speaks to the connection. If a slightly less drug-addled Johnson character lived in rural Alabama, he’d be here in these pages.”
—Jessica Upshaw Glass, from her blog, Discursus

“I loved the book, how deeply imagined the stories are. What’s unique about it is how innocent the central characters are, even those who’ve seen a bit of the world, and how heartbreaking their situations and actions. I like, too, how Deliverance and “Dueling Banjos” serve as a motif throughout the book” —Dan Mueller, author of How Animals Mate and Nights I Dreamed of Hubert Humphrey

“Each story is filled with flawed characters, choices both made and unmade, with consequences that inevitably reveal some of our darkest human truths. The writing is direct and deceivingly simple, and yet the world Yates creates here is tragic, beautiful and so heart-breakingly real.”
—Heather Labay, Goodreads review

“This novella and collection of short stories are set in the Deep South. Not all in the same small town, but the feeling of balmy summers, checkered pasts, and small-town familiarity permeates each piece. There is a running theme in each story of unfinished business, wrongs that haven’t been reckoned, a looming comeuppance. Each story is told simply with characters that immediately spark curiosity and sympathy, each one working through past mistakes and missed opportunities. … There is a darkness and a depth to each story and a few of them made me shudder with secondhand dread. It was a deeply affecting read, I highly recommend it.”
—Mollie McFarland, Goodreads review