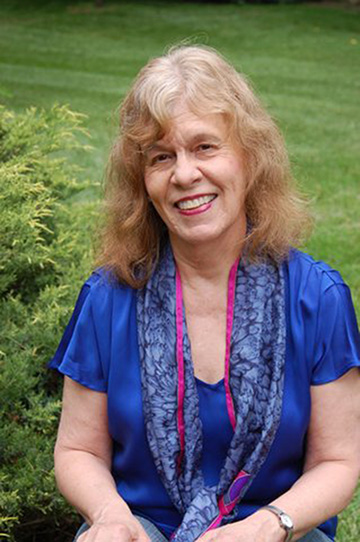 The Ardent Writer Press welcomes accomplished author and academic Nancy Owen Nelson with her memoir, Searching for Nannie B., an inspirational search for her roots in Alabama and her lost grandmother, Nannie B. Chandler, who died giving birth to Nancy’s mother, Nannie B. Nelson. And as of June 30, 2021 Nancy has published another memoir, Divine Aphasia! The memoir is a remembrance of her father, Woodford Owen Nelson, and the impact he had on Nancy’s life. 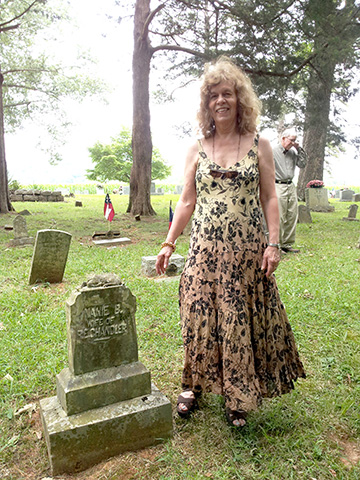 Nancy Owen Nelson at the grave site of her grandmother, Nannie B. Russell

FROM NANCY Since earning my doctoral degree, I have held positions of Professor or Instructor of English in colleges or universities. During my early professional years while I was teaching and raising a son, I focused on the writings of Frederick Manfred, author of Siouxland, the area where four states touch —Minnesota, South Dakota, Nebraska, and Iowa. Manfred’s career spanned over sixty years and over thirty books. He had collected his correspondence from 1934 to 1980. I was offered the chance to coedit the first volume of his Selected Letters, as well as edit a collection of essays about him and publish criticism on him and other Western American authors such as Wallace Stegner. In 1996, I was asked to edit a book of women’s essays in feminist literary criticism. The authors wrote about the impact of literature on both their private and their personal lives. The volume Private Voices, Public Lives: Women Speak on the Literary Life was published in 1996. Since that time, I have turned my writing efforts toward poetry and creative nonfiction. I have published several nonfiction pieces and poems in literary journals and anthologies. My memoir, Searching for Nannie B: An Ancestral Journey to Find My Grandmother, traces my process of discovery through research of public documents, an interview with a distant cousin whom I found through online ancestral research, research about the Primitive Baptist faith, and two trips to Alabama to visit the grave and learn about the community of Poplar Ridge, a rural community near Huntsville, Alabama. I began my research in November, 2011, just a month over ten years since my mother’s death in October, 2001. Only by writing this manuscript was I able to comprehend why I was so strongly motivated to understand the mystery surrounding my maternal grandmother, Nannie B. Russell Chandler; why no one ever spoke of her to my mother, and why she had never seemed a real, breathing person to me or my sisters, not to mention to my mother, her daughter. Although my mother reported visiting her grave at age ten and overhearing unkind comments from two women nearby, we as a family never visited the grave and I did not know where it was. Nannie B. Russell Chandler died on July 12, 1905, one hour after birthing my mother, also named Nannie B. For her entire life until her death in 2001, my mother carried the burden of guilt about her mother’s death, a burden which exacerbated her sense of not belonging. Through online research and work with a local genealogist from New Hope, Alabama, I was able to locate my grandmother’s grave, among other members of my family, in the Primitive Baptist Church of New Hope. My mother had told me for years that her parents were Primitive Baptists, but I knew nothing about this faith. Determined to find out all that I could, I plan a research trip to Alabama in June 2012 to “find my roots.” My findings lead to many discoveries about my family and about myself. This journey into my religious and historical (Confederate) roots puts my dislocation in a different perspective. My subsequent research and travels, and my interviews with a third cousin, Helen, who knew stories about my grandmother, allowed me to write the book. The memoir is the journey itself. Perhaps the greatest revelation I received from this process was the realization that I was carrying in my body the burden of both my mother’s grief and my grandmother’s trauma at her death. Other than a genetic predisposition to depression, I had no other explanation as to why I would fall into deep pits of darkness for long periods. Finding out about Epigenetics, the scientific notion that trauma and experience can be carried for two generations as a part of DNA, allow me to release the burdens of the past. I am delighted that The Ardent Writer Press has accepted my book for publication, especially because of its proximity to the cemetery where my grandmother is buried, Bethel Primitive Baptist Church of New Hope. The journey has come full circle. Your Friend, Nancy Owen Nelson

Searching for Nannie B.

Here is the LINK to the paperback version of Searching for Nannie B. on Amazon

Here is the LINK to the preferred site (Heyo Cart) for buying an eBook copy of Searching for Nannie B.

Here is the LINK to Kindle Direct Publishing/Amazon which is also selling an eBook copy of Searching for Nannie B.

Nancy Owen Nelson has published articles in several academic journals and anthologies. She is co-editor of The Selected Letters of FrederickManfred: 1932-1954 (University of Nebraska Press, 1989) and editor of Private Voices, Public Lives: Women Speak on the Literary Life (1995, University of North Texas Press) and The Lizard Speaks: Essays on the Writings of Frederick Manfred (the Center for Western Studies, 1998). She has a published poetry in the, What Wildness is this? (University of Texas Press, March 2007) as well as in the South Dakota Review and Graffiti Rag and has creative nonfiction pieces in Mom’s Writing Literary Journal (Fall, 2008), Lalitamba journal, and Roll (Telling Our Stories Press, 2013). She is currently teaching writing in several colleges and a memoir workshop for Springfed Arts (a Detroit literary/music organization). 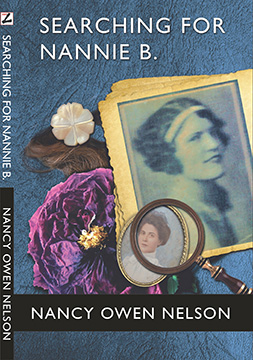 Searching for Nannie B.

How would you be affected if your mother died giving you life? And how would such a loss affect your children? These questions are the foundation of many issues raised by the author in her search for the missing pieces of a grandmother who in 1905 died giving the author’s mother life. It was a tragedy that seemed to affect multiple generations, the voids in identity and ill-spent guilt flowing from the stream of blood that kept mother from daughter, and then from granddaughter. But it was a search well-spent.
The Reverend Roger Mohr, First Unitarian Universalist Church of Detroit, may have said it best. “Often the tapestry of family history does not seem to offer us the sort of clarity about who we have become, and why. And sometimes the narrative tells us a story about ourselves that we do not wish to accept.” Nancy Owen Nelson’s search resulted in raising more questions about herself, even as it answered questions about her mysterious grandmother. Nonetheless, in the end her journey toward discovery was one of startling self-awareness and connection. No matter whether you feel connected or lost in family, you will be unable to avoid the heartfelt pleasure and pain that comes from the author’s brave attempt to connect three generations of Southern women. 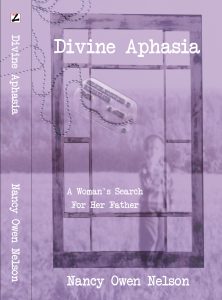 Divine Aphasia’s poignant story is tragic and often dark, yet hope permeates the struggles of the author, Nancy Owen Nelson, as the background in her childhood exposes her vulnerability to men and life. The story reflects a loving but delicate father, Woodford Owen Nelson, a military officer, who passes these same qualities to the author. As an adult, the author labors through multiple marriages and affairs in a difficult search for identity blurred by the experiences of the constant moves of her father from one Army base to another. Colored along with his alcoholism, these experiences ultimately result in the codependences of Nelson, her mother, and sisters as well as stiff barriers to stability.
Only in her final unsuccessful marriage to a colleague with Aphasia does the process reach a breaking point that shatters these barriers and leads Nelson to acceptance that love from her father and love of herself can co-exist with recognition of their human limitations and faults.

Private Voices, Public Lives: Women Speak on the Literary Life talks to the challenges of women writers. Interweaving the personal, private voice with scholarly, public intent, Nelson and the other contributors argue for a more interactive and cooperative approach to the teaching, reading, critiquing, and writing of literature. — Midwest Book Review

The Lizard Speaks: Essays on the Writings of Frederick Manfred

The first collection ever of essays about the writings of Frederick Manfred, best-selling novelist of the American West. Edited by Nancy Owen Nelson, of the Henry Ford Community College, “The Lizard Speaks” is composed of essays by eighteen leading students of Manfred’s work and covers the main body of his novel writing, from “The Golden Bowl” (1944) to “Of Lizards and Angels” (1992).