J. D. Frost caught the creative bug at age four when his mother showed him how to draw Santa Claus. Though he led the normal life of growing boy to teen to man, the bug took its time to dig deeper. While serving in the military on the west coast, he took night classes in film at Long Beach City College, but opted to return to Alabama. Restless, he studied painting under North Alabama artist Clayton Whittle for four years. Nothing seemed to take until Nuvein Magazine published a short story he had written. Another story was included in Linda Busby Parker’s Christmas is a Season, 2009!

Then he discovered mysteries. While at a convention in Los Angeles, he walked a few blocks to Angel’s Flight, a small incline railroad featured in a best seller. Fascinated with what the author had done with the setting, J.D. knew he had found his challenge. He chose Chattanooga, a city with as many interesting locations as Los Angeles, as the backdrop for his debut novel, Dollface (August 2014), and its sequel, Face2Face.

His main character, Moses Palmer, works in the Major Crimes Division of the Chattanooga PD. Having been fired from Atlanta homicide following a dust-up with his ex’s father, Moses tries to keep a low profile. Then a serial killer with an odd MO fixates on Moses. The ensuing string of killings results in a media storm. Chattanooga is a tourist city; community leaders are alarmed. His psycho boss is no help. Soon everyone in the city is ready to send Moses back to Atlanta, everyone but the killer, the one known as Doll Face.  The sequel, Face2Face, a political thriller with kidnapping and of course murder, was published in August, 2015.

J.D. and his wife, sculptress Donna Frost, live in North Alabama.  He is a founding member of the Coffee Tree Writers Group in Huntsville, The Moses Palmer stories will not only kick your teeth in, but will cause you to think.  Ardent Writer does mysteries!

DOLLFACE Published on Amazon in both print and eBook. 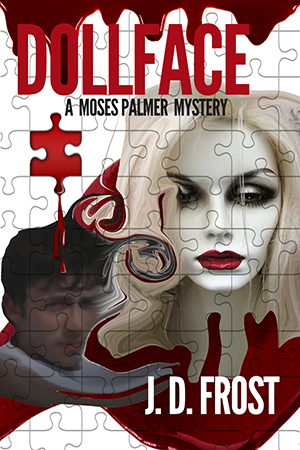 FACE2FACE Published on Amazon in both print and eBook. 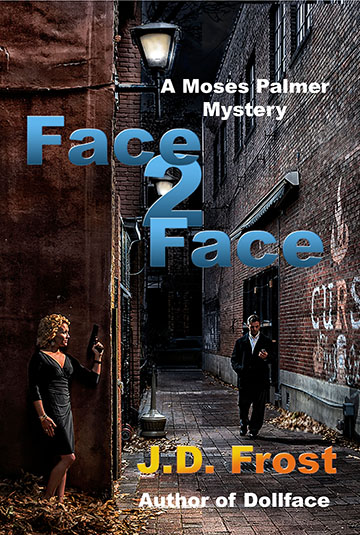