The Ardent Writer Press and

War brings chaos, not only for the combatants, but for their loved ones. And whether the war is right or wrong does not change the emotional heartache felt by all of those involved, especially so when a loved one is lost and especially so when their whereabouts or their fate are unknown. That is what Twilight of Honor is all about, that and the healing power of love. For Wynne Reardon, wife of pilot Michael Reardon, the unknown controls her life, interweaving all fabrics of her relationships with others and producing a depth of sorrow that is difficult to fathom.

The Ardent Writer Press is excited and ecstatic about the upcoming release of this wonderful novel by proven author, Annie Laura Smith. We hope all of you give it a great big thumbs up on Facebook and Twitter. Give it a read once it is out in late October and in November in both print and ebook versions.

HERE IS A QUICK SUMMARY from WWII Veteran Bombardier and Navigator Joe Connaughton:

“Annie Laura Smith, in a departure from her usual YA World War II fiction, has written an adult historical romance novel, Twilight of Honor.

This novel focuses on the common theme of all wars – how to replace the love of a lost loved one. After Wynne Reardon opens a Gulf Coast gallery – a dream planned together with her Air Force husband Major Michael Reardon – she cannot let go of the shock she felt five months earlier when he was reported Missing in Action in Vietnam.

Author Smith deftly carries the reader through Wynne’s emotional heartache as she deals with remembrances of the love of her husband versus the new love developing with Jason Garrison. He is a handsome, skilled potter she hires to help make Shoreline Gallery successful. Complicating matters is the fact that Jason was a Vietnam War protestor, though a veteran, while Michael won the Medal of Honor posthumously for his valor in the War.

Whether or not this fragile relationship can survive Wynne’s persistent hope for Michael’s return as a P.O.W., is the question Smith uses effectively to entice the reader to each successive page and chapter.”

AND FOR THOSE OF YOU WHO CAN’T WAIT FOR THE SHIPMENT OF YOUR COPY OF TWILIGHT OF HONOR, HERE IS A LINK TO THE PROLOGUE AND THE FIRST CHAPTER.

Below is a photo of the cover. Or see it in greater detail at the link on right hand side. 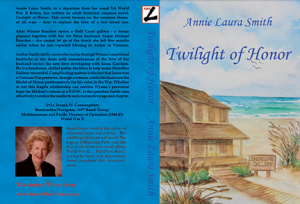 2. To buy a copy of Twilight of Honor on Amazon CLICK HERE.

A WELCOME FROM ANNIE LAURA

Welcome to those of you who enjoy reading historical fiction, and to others who will find such stories of interest. Since 2004 I have published four books for Young Readers about World War II. My intent was to show how young people in Europe coped with the war, and helped free their countries from Nazi domination.

The Legacy of Bletchley Park, set in England, shows how a 12-year-old girl’s German fluency helped with translations of the broken codes. Will Paris Burn? demonstrates the bravery of a young man as he works with the French Resistance to keep the German General from destroying Paris. Saving da Vinci reveals how young people rise to the occasion to save downed Allied fliers, and keep the priceless Italian artwork from confiscation by the Germans. Alexandra’s Secret addresses the older YA age group as a young, brave OSS agent has to find a lost vital invasion map before it falls into German hands.

I attended a Writer’s Conference where the keynote speaker discussed how to use coping with a loss as a theme for a novel. I realized that I had shown primarily how young people participated in World War II, but had not revealed adult involvement. This analysis was the origin of Twilight of Honor.

The Vietnam Era occupies a central place in the history of the twentieth century. We had three family members – a Navy Seal, a fighter pilot, and a helicopter pilot – in the Vietnam War. Although they all survived and came home safely after the War, I realized this War was an excellent era for a story about dealing with a loss. We dealt with that fear every day our loved ones were in Vietnam. When the fate of a loved one is also unknown for a long period of time as occurs when Major Michael Reardon is MIA, the anxieties intensify.

The title, Twilight of Honor, comes from the fact that the Vietnam War was in the twilight zone of constitutional power. It was never officially declared a war by Congress. The honor that Major Michael Reardon received with the Congressional Medal of Honor also occurred in the twilight because of the ambivalence of the American people toward the War.

I hope you will enjoy reading Twilight of Honor as you see how Wynne and her son, Stephen, and daughter, Lauren, face the challenges of the unknown fate of their loved one, his subsequent loss, and in what manner they move on to a new life without his presence.