The Alabama Writers’ Forum and Huntsville Literary Association met for the first time in a joint endeavor to increase the support of the literary arts in the state.  The Forum is the only literary/writers’ group with both a statewide presence and a staff of paid professionals.  HLA has been in existence for over 45 years, supporting the literary arts in numerous ways, including the Dorothy Diemer Hendry Award for Literary Achievement that Ardent Writer Publisher Steve Gierhart chairs as part of his membership with HLA.  Gierhart is also a member of the board of directors for AWF.  As a key member in both organizations, Gierhart orchestrated the meeting as a way of synchronizing efforts, especially their high school writing competitions.

They met in the conference room of the University of Alabama Huntsville’s Presidential Suite, Shelbie King Hall on Friday, July 26.

By the end of two hours of discussion, a plan had emerged toward helping each others’ efforts, including digitizing the registration system of AWF’s Alabama High School Literary Arts Awards.  They also discussed ways to obtain funding to improve and expand their projects. 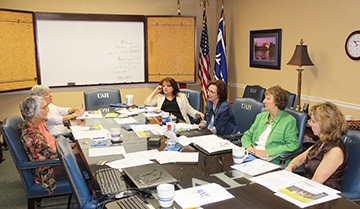 Members of Alabama Writers Forum and Huntsville Literary Association meet for the first time in a joint effort to improve and expand their separate high school writing contests.